Earlier this evening on my social media account someone had posted this week’s article from New Yorker magazine, which featured the Cascadia Subduction Zone and the immense earthquake threat in the Pacific Northwest.

I knew all about the article and have just returned from QuakeSmart Earthquake Preparedness summits in Seattle and Portland. I’ve been writing about Oregon and Washington preparedness for the last couple of months. What struck about the social media post was one comment, which read in response to the earthquake threat “Or, you could get hit by a bus tomorrow.” I wonder, do people really think like that? Do folks look at death-by-earthquake as a random, unpreventable inevitability? I don’t; nobody I work with does. Do you?

Earthquakes are a disaster in which the impact is quite often felt in direct proportion to preparedness, or lack thereof. The Napa earthquake bore that out, almost in textbook fashion.   The earthquake preparedness formula is basic and straightforward: Secure the structure, secure the space, get provisions, be part of the solution.

I am certain that not everyone in the Pacific Northwest has a “hit by a bus” mentality when it comes to earthquake preparedness. And though I doubt droves of people are moving away from the coast in fear of the estimated 100 foot tsunami bound for certain sections of the coastline, the New Yorker article has had an impact.

The phone at our Quake Cottage offices rang steadily all week, as people called us from Medford to Bremerton. Many folks who saw us two months ago in British Columbia contacted us as well. 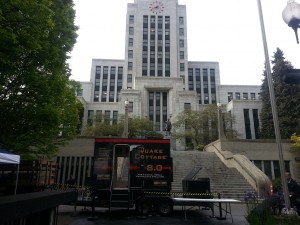 This week we will coordinating a return trip to the region with the Quake Cottage. That is if we don’t all get hit by a bus first.