There was a lot of news coverage of recovery efforts following the 2011 Japan earthquake. In addition to the search for survivors following the massive quake and tsunami, relief efforts were coordinated and organized provision distribution stations were established. 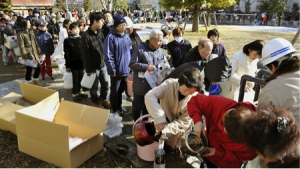 I remember television commentary on the orderly nature of the distribution proceed. Everyone was so calm, so well behave. Experts wondered how Californians would behave faced with similar circumstances. 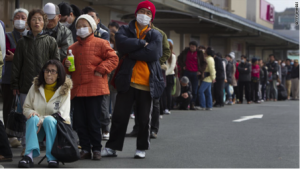 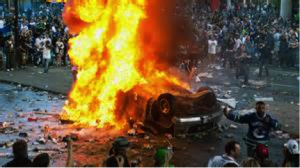 I wonder. Still, when I think about my life post-mega quake I really would prefer to avoid any type of distribution line at all—peaceful or not. Think about it. Even in the most orderly distribution system, someone from the family would be in line all day. Get in line at dawn to get breakfast. Eat breakfast. Get in line for lunch. Eat lunch. Get in line for dinner. Eat dinner. Go to bed and do it again tomorrow. I don’t know if things would shake out like that, but why would I want to get in line anyway?   I prefer the attitude of the late comedian John Pinette: Get Outta Line!

Last week’s blog introduced the real potentiality that some services and infrastructure may not be available for more than a year after a major earthquake. I don’t think a 72 hour kit is going to cut it. At the most recent QuakeSmart summit the audience was told that a two week supply of food and water would be more likely what the average family should keep on hand.

I see a problem here. If the water out of the tap takes months to come back on, and I have three days, or even two weeks of water on hand, and it’s not raining, and I need water; I am faced with the real probability of having to get into line. I think I’ve been clear. I do not want to get into line.

Everything about this preparedness effort my family is on has been progressive in nature. We have water for two weeks for everyone (including pets) in the household. How did we get there? Let me walk you through the step by step process:

First we got three days’ worth of water. We had at the time four adults, two cats and one dog in the house. The recommended amount is a gallon per person per day. So, four adults times three days is twelve gallons. I added a quart per day for each pet. This would add a bit over two gallons to the total. So, for starters, we purchased a 15 gallon food grade barrel, and added a cool preserver to it and the water was ready for the next five years.

But, as is the case with many families, things change. Uncle Don moved in with us, and we added his dog Pickles to the clan. Plus, we now want enough water for two weeks minimum. The math is the following: Five adults times one gallon times fourteen days. We now need seventy gallons of water on hand for the humans, and a little more than three gallons for the pets.

Our water on hand today takes on many forms. We have that original fifteen gallon barrel with the preserver in it. We’ve added a 55 gallon barrel, and a case of liter size water in plastic containers. We are accumulating full cases of the five-year pouch water as well.

My guess is that the powers that be may eventually recommend folks keep months of provisions on hand. I am no prepper, and really would rather not drop off the grid and construct a seven thousand gallon water tank or two. In the end my guess that despite my efforts, I may need eventually to get in line if the earthquake is catastrophic. And if that occurs I promise, I will behave.