Banners hung from light poles announced April as Earthquake Preparedness Month as we headed down Santa Monica Boulevard this morning, rolling into Beverly Hills with the Quake Cottage Earthquake Simulator. I think this was our eighth consecutive year at the city’s Earth Day Farmers Market, and each year the event seems to get significantly larger.

We show up, set up, and shake up event attendees, teaching riders the basics of earthquake readiness, and informing parents on how to keep their children safe from the damage an earthquake can cause. The simulator contains multiple items held in place by the incredible, peel and stick Safe-T-Proof Fastening System, and riders not only can feel which high-intensity ground motion is like, but also see that the fastening down of items really does work. 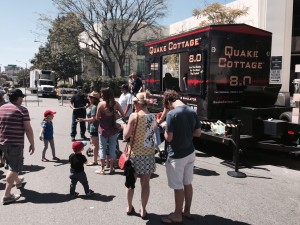 The continual, year after year appearance at one location affords me the opportunity to see what people are interested in doing to prepare themselves and their families as the months pass. Each year the focus seems to be on a different aspect of readiness. I find these annual changes in priorities for people fascinating.

As an example, two years ago many of the attendees needed help in securing building contents in their respective apartments. It seemed as though the word had gotten out—if you live in an apartment in Beverly Hills, secure contents now! Last year’s event followed by a few weeks a 5.1 earthquake in the Wilshire District of Los Angeles, just a few miles from Beverly Hills. Earth Day event attendees seemed rattled by that March 28th temblor. It seemed the most common questions during the day had to do with preparedness at work. “How do I secure my work?” was a common query, to which we replied with, “First, let’s get you out of your office!” We gave guidance and offered up for sale workplace fasteners to keep file cabinets and bookshelves in place.

This year, a bit removed from any recent local seismic activity, we had a lot of folks interested in emergency food and water. A lot of people indicated the food in their kit had expired, and they just wanted replacement food. The new Safe-T-Proof radio flashlight was a very popular item this year as well, particularly once people found out that the device also charges cell phones (Yes, I-Phones too). We ended up selling out of food, water and radios in Beverly Hills this year.

Another item that sparked enormous interest, and one that I sold out of way too early at the event, was the flat screen television fasteners. I could have guessed this.   Recent reports regarding household accidents from television and furniture tip-over are staggering and have moved the securing of items beyond the realm of earthquake preparedness, and into the not-so-regional arena of family safety.

All in all, it was another wonderful Earth Day with the Quake Cottage in Beverly Hills.

Next on tap: THE NEW MEGA-QUAKE COTTAGE MAKES ITS NATIONAL DEBUT AT SONY STUDIOS ON APRIL 25th.