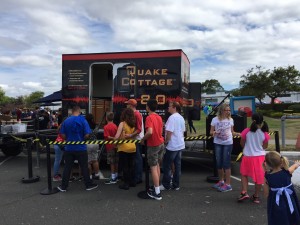 These trips come in the midst of other planned training exercises at United States Air Force and Marine facilities in the region. In fact, we’ve been fortunate enough to have trained hundreds of our troops and their families in the basics of earthquake readiness and the techniques of home fastening over the past several years. On top of that, the United States Navy actually owns two earthquake simulators that we custom-built for them. These units are in use over in Japan.

Why, you may ask, is there such a focus on earthquake preparedness in the armed forces?

I often get the opportunity to provide a training seminar during our Quake Cottage visits to bases. During one recent session I learned that a large majority of the folks stationed at the base don’t live at the base itself. That was a surprise. I thought most everyone stationed at these bases lived in barracks on the bases, like in the old Gomer Pyle show.

Times most certainly have changed. So apparently, like most everyone else, many military base folks have to commute to work on a daily basis. And it just won’t do to have members of the military not show up to work because of an earthquake.

Before I gave a recent presentation to about 300 people at military facility, the commanding officer stressed the importance of home readiness to his troops. While he did not mandate that everyone under his command prepare their personal residences for a major earthquake, he did stress that when such an earthquake strikes, failure by anyone to show up as directed to their post following such an event would not be tolerated.

It makes sense. The National Guard and Army Core are not the only responders in a major disaster.

The fact is falling furniture, broken gas lines and even wedged doors can cause significant ripple effects in an earthquake. The military seems to be doing something about that.