About three weeks after last year’s Napa earthquake, engineers from Stanford University unveiled what was called an “earthquake resistant” house.

The building was base-isolated; situated on rollers that allowed it to skate back in forth and remain unscathed in a shake table test that was described to be three times the “intensity” of the 1989 Loma Prieta earthquake. I was reminded of the news when I recently drove past the Disney movie studios in Burbank, California. My wife worked at the studios during the 1994 Northridge earthquake, and she told me that the buildings that suffered the most damage on the campus were the ones that had recently been base isolated. Base isolated buildings reportedly performed quite well in the Japan tsunami earthquake, while base isolated computer servers did not in the destructive 2011 Christchurch New Zealand 6.7 earthquake.

So how do you know if the building you are in is safe in an earthquake? Even engineers don’t always agree. World renowned earthquake expert and best-selling author Peter Yanev caused quite a stir with his New York Times article on the vulnerability of tall buildings in Seattle.

This came on the heels of a report from the Oregon Department of Education that announced that more than 1000 school buildings in the state had either a high or very high probability of collapse in an earthquake.

Still, large earthquakes have recently shown that we can build structures that can withstand enormous amounts of shaking. Check out the top left photo below. This is a building in Chile that shook for more than 4 minutes in an 8.8 magnitude earthquake in 2010. 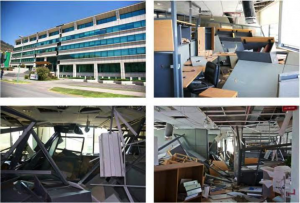 This building doesn’t even have a broken window, and shook longer and harder than most buildings ever will. Still, the company that occupied the building was put out of business, because they hadn’t bothered to secure the contents inside (the rest of the photos), but that wasn’t the building’s fault. It’s one strong building!

I live in a single story, wood frame home in Southern California. This is the exact type of structure that the USGS recently referred to as “Seismic Zones of Safety” due to their exceptional performance in earthquakes. And, unlike the company in Chile with the super-strong building, I HAVE secured the contents of my home. Still, I wonder. Should I put in some of those Stanford Rollers?