Sure it’s over the top. Certainly its fantasy to the nth degree. But when the new Warner Bros. Studios movie San Andreas in theaters on May 29th, people all over earthquake country will feel the shock-wave.

Now, to be clear, no actual earthquake will ever approximate the devastation this movie depicts. Check out this trailer: San Andreas – Official Teaser Trailer. In reality, California is not going to fall into the ocean in an earthquake; no temblor will ever cause all of the skyscrapers in Los Angeles to crumble, and a tsunami will never destroy the Golden Gate Bridge. In fact, future Rock the Quake blogs will explain why Southern California won’t ever fall prey to a 9.0 magnitude earthquake. Still, doesn’t the movie look exciting?

A few weeks ago I had the privilege of heading out with the one of our Quake Cottage earthquake simulators to a studio in Los Angeles where MTV filmed several vignettes promoting the movie. They aired on the MTV Movie Awards on April 12th.   Duane Johnson, better known as The Rock, was there. Not only was he kind and funny, but he held his balance—standing up inside the simulator while it was rocking—better than anyone I’ve seen before. Must be all of that surfing experience. 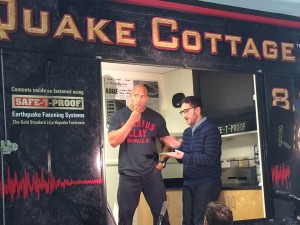 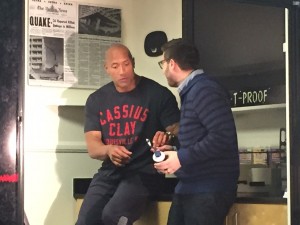 While disaster movies are often hit and miss at the box office, I have my own hopes for San Andreas. Here they are:

Take a look at some of these shocking historical photos of earthquake devastation.